WEST PALM BEACH, FLA. (July 28, 2020) – At a meeting of the West Palm Beach City Commission on July 27, 2020, Commissioners unanimously approved a public/private partnership agreement between the City and Related Companies, LLC for the City’s acceptance of a large-scale sculpture by British Nigerian artist Yinka Shonibare, CBE as an addition to the City’s public art collection. The agreement represents the first-ever, large-scale public and private collaboration for a world-renowned artist in West Palm Beach. 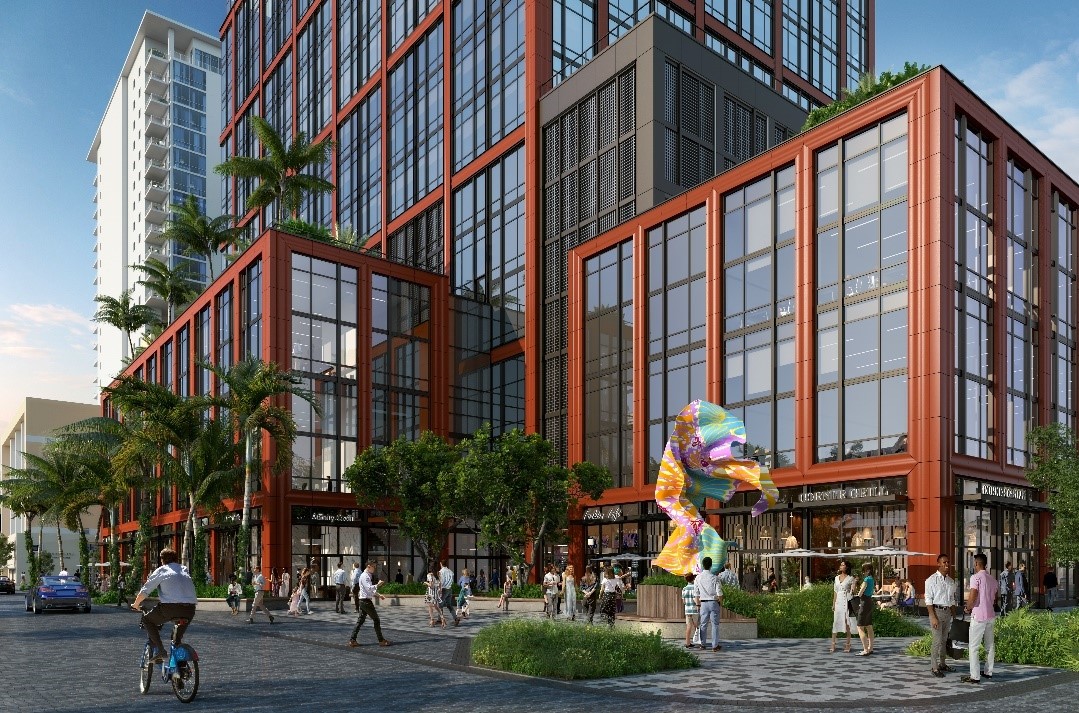 The notable Material (SG) II, a part of the artist’s Wind Sculpture series, will be located at the outdoor plaza at 360 Rosemary, a Class-A office building set to debut in 2021. Commissioned in collaboration with Related Companies, the West Palm Beach Art in Public Places (AiPP) program, and the City of West Palm Beach, the vibrant artwork will further enhance this culturally rich district. Shonibare’s Material (SG) II was inspired by the global movement of people.

“We are deeply honored and appreciative to have this installation by an artist as distinguished as Shonibare in our City,” said West Palm Beach Mayor Keith A. James. “This partnership with Related Companies helps to make a truly significant artwork available and accessible to the residents and visitors of West Palm Beach. This reinforces the importance of our continued work with the private sector to support the inclusion of arts in the public realm.”

“The inclusion of a significant and vibrant sculpture by an internationally celebrated artist such as Shonibare elevates the discourse around public art in the City of West Palm Beach,” said Sybille Welter, Administrator of Public Art and Culture for the City of West Palm Beach. “The City’s partnership with private companies, such as Related Companies, is a major step toward establishing the City as a not-to-be-missed arts destination. It also affirms both entities’ commitment to bringing art experiences and ideas directly to the public.”

Set to be unveiled in 2021, Material (SG) II will become the artistic anchor of the 300,000 sq. ft. LEED Gold-anticipated 360 Rosemary. The colorful hand painted fiberglass sculpture will stand 20 feet tall and represent the notion of capturing the movement of wind and freezing it in a moment in time. The fabric, which is commonly considered to be traditional African cloth, is based on Indonesian batik patterns, factory-produced by the Dutch and sold to West African colonies in the 1800’s. Shonibare’s Wind Sculpture series harnesses the metaphors of the hybrid fabric and the invisible force of nature to explore global migration and our interconnected contemporary culture.

“Related Southeast is deeply committed to supporting diverse artistic voices and incorporating unique cultural and global viewpoints into our acclaimed public art collection. With Shonibare’s work, we are now expanding this mission to the north end of the Rosemary Square district at 360 Rosemary,” said Gopal Rajegowda, Senior Vice President, Related Companies. “We are proud of the private and public partnership with the City of West Palm Beach that allowed us to bring such a distinguished artist to our dynamic neighborhood.”

In 2013, Shonibare kicked off his Wind Sculpture series which is now exhibited across iconic destinations around the world such as the Smithsonian National Museum of African Art in Washington and the Ndubuisi Kanu Park in Lagos.

“My work is about celebrating the diversity of communities and highlighting our connections,” said artist Yinka Shonibare. “I do not ever underestimate the importance of public access to such basic principles of inclusion.”

Shonibare’s works are included in notable collections including the Tate Collection, London; Victoria and Albert Museum, London; National Museum of African Art, Smithsonian Institution, Washington, D.C.; Museum of Modern Art, New York; National Gallery of Canada, Ottawa; Moderna Museet, Stockholm; and the Museum of Contemporary Art in Chicago. In 2019, he was awarded the honor of Commander of the Order of the British Empire.

The West Palm Beach Art in Public Places (AiPP) Program seeks to create public art that encourages artistic exploration, infuses creativity in the City’s diverse neighborhoods, celebrates the City’s historical richness, and embraces art as an integral part of everyday life, while transforming the City into a local, national, and international destination. The AiPP program was established in 1985. By ordinance in 2014, the program mandates that funds totaling 1% of private development projects and public projects throughout the City be set aside for the inclusion of art.

For a rendering on the artwork at 360 Rosemary, click here. For additional renderings click here. For more information, visit https://www.wpb.org/our-city/art-in-public-places or call AiPP Administrator of Arts and Culture Sybille Welter at (561) 822-1521 (TTY 800-955-8771)