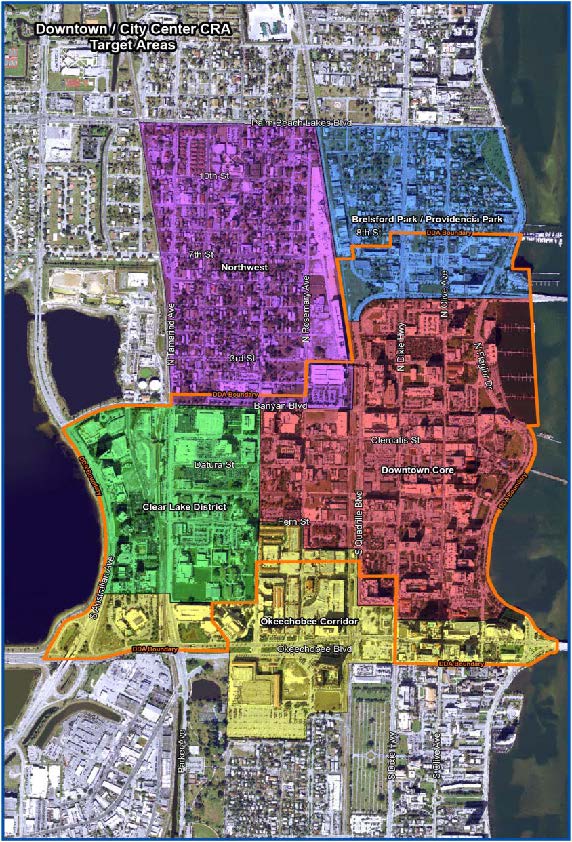 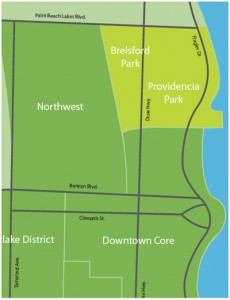 Brelsford and Providencia ParkLocated just north of the downtown area, the Brelsford / Providencia Park area is a mix of residential and commercial property. Also known as The Industrial Chic District, the area located adjacent to the FEC railroad line and originally developed for industrial uses, is currently incompatible with bordering areas. However, the existing structures provide an opportunity for an avant-garde neighborhood that promotes less conventional housing types such as live-work units and lofts. Comparable to a warehouse district, this area will appeal to emerging artists, individuals seeking atypical housing choices and small start-up businesses.

The CRA also envisions the area as a target for a medical village concept, taking its development cues from Good Samaritan Hospital at Dixie and Palm Beach Lakes. In 2014, construction on a major apartment complex commenced at Quadrille and Dixie.

The Clearlake District (Downtown CRA) can be characterized as a mixed-use area of hotels, offices, governmental uses and residential properties. The vision for the Clearlake District includes a Transit Oriented Development (TOD) that hinges on the redevelopment of a 36-acre site immediately adjacent to the historic Seaboard Train Station. The TOD is envisioned to become a pedestrian-friendly, neighborhood village with a mix of uses including green connections and plazas with pedestrian and transit connectivity. Because of its proximity to the commuter Tri-Rail station, the proposed uses include a multimodal facility, housing, hotel, retail and parking.

The relocation of the Fourth District Court of Appeals courthouse was announced in 2014 on Tamarind, across from the planned TOD.

Negotiations for a spring training facility for professional baseball in West Palm Beach in 2015 included a swap for a County-owned parcel to the south of the Court of Appeals courthouse which will provide a significant opportunity to connect development activity to the TOD.

Clematis Streetscape is a project that puts people first. Initiated in 2018, the downtown revitalization project has moved forward with a phased approach to improving the City’s historic Clematis Street. The project uses modern infrastructure and vibrant design elements to create a more enjoyable user experience. Improvements include wider sidewalks, more shade trees, and narrowed traffic lanes to induce traffic calming. It aims to better connect the community by creating an easier to walk, healthier and overall more enjoyable downtown core.

The project was broken down into three phases and is now more than 50 percent complete. Similar to the first two phases, the third and final phase has started with a public meeting period to discuss scheduled improvements to the 400 and 500 blocks. The City anticipates breaking ground on Phase III in May 2020 and wrapping up construction by the end of the year.

While not yet fully finished, the design is already award-winning. The design won the People’s Choice Award at the 2019 Safe Streets Summit.

Background on Clematis Street/more info on the project

Since 1894, Clematis Street has been the hub of the West Palm Beach business district – and in more recent years, dubbed the “living room” of the buzzing downtown community. The City of West Palm Beach continues to take a proactive approach to maintain and improve the heart of downtown. Known today as the “Main Street,” residents and tourists converge to shop, dine, do business, relax, and have fun along Clematis Street. The authentic architecture along Clematis Street has evolved over the last century, spanning nearly every significant era and style from 1890 to 2009. With a current urban renaissance successfully underway, the City has embarked on a dynamic project to improve the iconic Clematis Street, known as the Clematis Streetscape project.

The goal of the project is to improve the quality of life for people who live, work, and play downtown. With a rich history and vibrant business community, incredible care has been given to inviting community feedback at the start of each phase. The City has reached out to community stakeholders, including Clematis Street merchants, the DDA, DNA, and others, to capitalize on Clematis Street’s strengths and solicit feedback on the overall design of the project. Additionally, the public has also been invited to multiple meetings to provide input and engage in thoughtful discussions with City leaders, project managers, and project designers.

The City has retained visionary urban planning company, Dover, Kohl & Partners to design a polished and professional solution to the next phase of Clematis Street. With a strategy that focuses on smart growth and sustainability, the Coral Gables-based firm believes there does not have to be a trade-off between livability, economic prosperity, and environmental concerns. Victor Dover and Joseph Kohl, who are charter members of the Congress for the New Urbanism, and have worked for many public agencies, developers, and citizen groups, structure their designs with this guiding principle.

Expert engineers Kimley-Horn has been retained to implement the project and ensure quality details and execution.

HISTORY AND REDEVELOPMENT OF CLEMATIS STREET 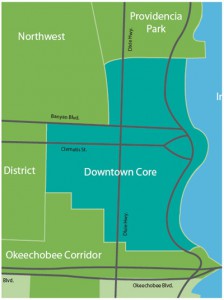 The Waterfront and City Commons area embarked on a major transformation with the demolition of the old Library and the creation of a new City governmental complex on Clematis Street. The redevelopment of a high quality string of waterfront parks and assets is being developed, funded by a coalition including the CRA, DDA and the City Parks and Recreation Department. A shade covered promenade, three new public docks, water gardens, arcades, a floating walkway, piers, a lake pavilion, an amphitheater and a beach will be designed to create a harmonious experience for residents and visitors to the Downtown Core.

Major CRA initiatives include the redevelopment of the old City Hall/Helen Wilkes site and the aging Banyan Street Garage and the infrastructure work to support the All Aboard Florida train station on Quadrille. 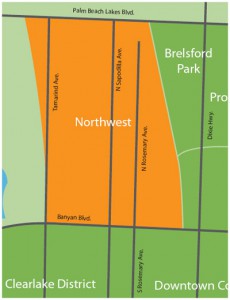 The Historic Northwest district is perfectly positioned for rebirth. Located just north of downtown, the neighborhood boundaries extend from Banyan to Palm Beach Lakes, west to Tamarind Avenue and east to Rosemary Avenue. The Northwest is rich with history and culture.

Predominantly residential, the majority of the area is designated as a historic district. Two commercial north-south corridors, Rosemary and Tamarind, form the borders of the neighborhood. In 2011, the CRA and a group of stakeholders collaborated to create an Action Plan that focused redevelopment activities in six areas; business development, transportation, residential development, marketing and branding, security and capital improvements. The improvement program includes new street-scape along the 7th Street corridor. In addition, the entire Tamarind Corridor will be realigned and resurfaced from Banyan to Palm Beach Lakes.

The Historic Northwest is ideally positioned to become a cross-cultural destination with the planned historic restoration of the famed Sunset Ballroom and Lounge (8th Street and Henrietta) and the development of a related Jazz Park and other assets. 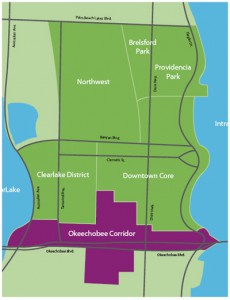 The Okeechobee Boulevard Corridor is the major east-west thoroughfare and gateway into downtown West Palm Beach. One of the earliest Downtown CRA public/private partnerships, CityPlace, with its trendy mix of eclectic and upscale stores as well as restaurants and nightclubs, calls a portion of the Okeechobee Corridor its home. A mix of hotels, offices, residential condominiums and the Palm Beach County Convention Center can be found along the Okeechobee Corridor. The Kravis Center hosts several cultural amenities adding to the quality of life for residents and visitors.

The Okeechobee corridor is also the site of several potentially significant parcels of real estate, destined for redevelopment. Related’s “triangle site” is being redeveloped with a 50,000 square foot Restoration Hardware. The CRA owns the "tent site" at Okeechobee and Quadrille, a square block of prime land. A third parcel, the "opera site" is a northern adjacency to the tent site and is available for development proposals.

In 2014, the CRA co-sponsored (with the City and DDA) a Jeff Speck walkability study to begin work on connectivity across the corridor.

Free viewers are required for some of the attached documents.
They can be downloaded by clicking on the icons below.