Climate change is the long-term shift in average global temperature. Small, local, short-term weather fluctuations are not an indicator of climate change. However, our climate is indeed changing.

Average global temperatures have risen by 1.5 degrees since the 1880s, and the last decade was the hottest on record in all of recorded history. In recent years, the weather has become significantly more extreme.

Earth’s 2016 surface temperatures were the warmest since modern record keeping began in 1880, according to independent analyses by NASA and the National Oceanic and Atmospheric Administration (NOAA). Globally-averaged temperatures in 2016 were 1.78 degrees Fahrenheit (0.99 degrees Celsius) warmer than the mid-20th century mean. This makes 2016 the third year in a row to set a new record for global average surface temperatures.

Recently, droughts, wildfires and floods have all been more frequent and intense. Hurricane Sandy was the deadliest and most destructive hurricane in 2012, and was also the second costliest hurricane in the history of the U.S., costing $65 billion. “Superstorm Sandy” affected 24 states, claimed the lives of 286 people, and in New Jersey, flooded streets, tunnels and subway lines and changed the coastline forever.

In Florida, we are especially vulnerable to rising seas and higher temperatures. It is vitally important to our state and our City to take responsible measures to adapt and mitigate the effects of Climate Change. Below shows a map of Florida at 5 feet of sea level rise by 2100. 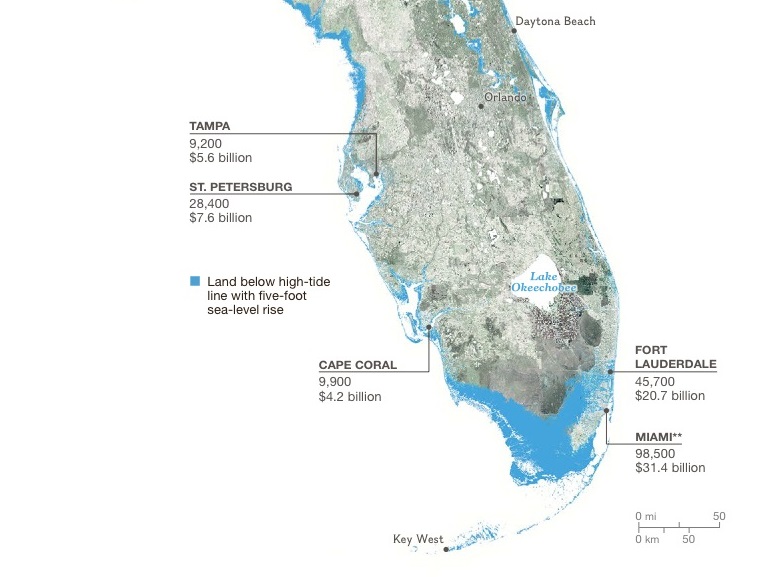