This initiative presented by the Art in Public Places Committee will be an ongoing series of temporary interventions throughout the city. Thus, West Palm Beach becomes an art laboratory for artists in various stages of their careers to further explore their practice in the public realm.

The projects are a meant to provide artists who reside in Palm Beach County an opportunity to go from their studio practice into the public realm, to further advance their practice or experiment with new materials. The Art in Public Places Committee facilitated a call to artists that encouraged bold ideas that would inspire curiosity and engage the public in new unrealized ways. Eddie Mendieta and Hector Diaz both West Palm Beach residents were selected by the AiPP Committee to further develop their initial proposals. 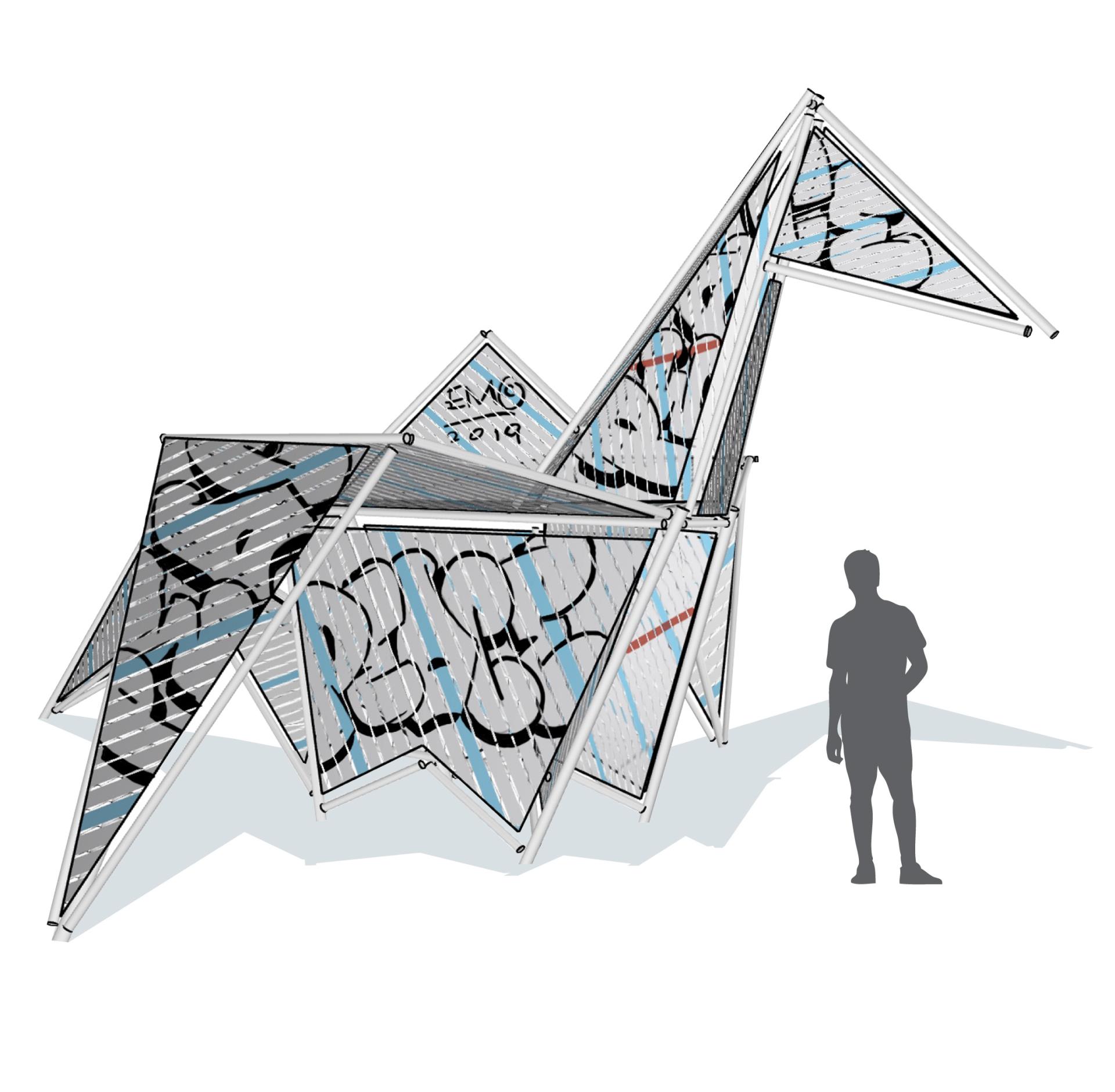 The Origami Chain Link Fence Sculptures to be exhibited in Northwood Village is a partnership with the Community Redevelopment Agency.  The CRA provided the space and additional funding for two site-specific murals to be installed on the existing on-site shipping containers. Eddie (EMO) known for his murals is expanding his practice into 3-D objects. Eddie has conceptually developed three large scale sculptures using everyday fencing materials. The works will be installed on a highly visible lot on 24th and Broadway.

Q & A Sybille with Eddie Mendieta:

Could you explain your practice and creative process?

“In my practice I have been working with the theme of writing messages on notebook paper and folding them into origami shapes, also I have been experimenting with the idea of using everyday construction materials to create sculptures, a definite jump from my murals!”

What do you hope to gain from this opportunity?

“My hope is that people come to see the exhibit and that they have a positive experience. My larger aspirations are that I will be able to produce more origami style sculptures and exhibit them throughout Florida and other parts of the country.”

How will you connect with the public?  “We are inviting the public to write messages, draw or sign their them with chalk at the opening event.  Afterwards some of those messages will be painted on the two shipping containers on the site as semi-permanent works.”  “The participation of the audience circles back to my idea of using fencing materials as often it is used to separate things or people, but as sculptural elements they are intended to bring people together.”

Q & A Sybille with Hector Diaz

Hector Diaz known for his chalk and anamorphic street paintings is creating a travelling exhibition Frame Your Neighborhood in four of the city’s parks.  AiPP partnered with the Parks and Recreation Department to present 2-D works that when viewed through your cell phone become 3-D.  The viewer’s participation is further heightened through an augmented app that allows for an enhanced experience.  The public will be invited to visit the four sites and engage in Diaz’s interactive augmented reality artworks.

Could you explain your practice and creative process?

I am a 3D street painter.  My typical medium is chalk, although I have used paint when the work is not to be temporary in nature.  My creative process is straightforward.  I try to create a piece that is interactive in some way so that the public has an opportunity to immerse themselves into the art and become a part of the piece.  Once I decide what my subject matter will be I have to create the image with a forced perspective of sorts so that image appears in 3D to the viewer when looked at through a lens or camera.

What do you hope to gain from this opportunity?

I am a native Floridian and Palm Beach County resident.  I have traveled all over with my craft creating street paintings and murals, but this is an opportunity to leave my mark on my own city.

How will you connect with the public?

As mentioned before, these pieces are interactive, so the public will connect with the art by becoming part of the murals.