What is the census?

The 2020 Census is extremely important to you, your family, your lifestyle, and the City. The more people who are counted, the more federal funds are given to the city. And that means the city will have more funding for improving your street, your neighborhood, and the city’s infrastructure, public transportation and services. For every person not counted, statisticians estimate that could cost cities like West Palm Beach almost $2000 in federal funding. That’s money lost for not counting just one person! Help your city—be counted!

The census is only taken once every decade. The goal is to count every resident in the United States. Counting an increasingly diverse and growing population is a massive undertaking. The 2020 Census will count our city’s population and households, providing the basis for distributing more than $675 billion in federal funds annually to support states, counties and communities like West Palm Beach. The census numbers directly impact our city’s housing, education, transportation, employment, health care and public policy. This money provides financial assistance for everything from food stamps and public housing, to road construction and tax-credit programs that encourage economic development in low-income areas. The census also reapportions congressional seats and redistricting.

The federal government conducts the census. The survey is a short form questionnaire. It asks for age, sex, race, ethnicity, home ownership, and number of people in a household and the relationship of the people in the household. It will not ask a citizenship question.

The Federal Government will begin census mailings in March, 2020. For the first time you can fill out the questionnaire online, so the mailings will be different than in past censuses. In March and April you will receive at least one letter or postcard from the U.S. Census Bureau. It will be stamped with the 2020 Census logo. The initial mailings will encourage you to fill out the form online. The later mailings will be sent to households who do not fill out the online form. If you successfully fill out the questionnaire online, you will stop receiving mailings. Every household should receive at last one mailed notification by April 1, 2020. If your household does not receive a notification by that date, call (800) 354-7271.

All information collected from you will be totally private and confidential. Census Bureau officials are required to keep all personally-identifiable information confidential until 72 years after the year in which it was collected. The bureau cannot share the information with any person or agency, including other federal government agencies. Your census data is used anonymously to compile a larger statistical picture.

Why is the census important to me?

What does that mean to you?

It means that there is less money to spend on services that directly affect your life. Federal money is used to fund health care, hospitals, fire and safety departments, housing, roads, and food and nutrition programs. The census data is used to determine long term city projects, like building schools, or other public facilities, or creating new bus schedules and routes, or where to allow new businesses or new housing to be constructed.

Other uses of the census data:

How do I participate in the census?

It’s easy. For the first time ever in a U.S. census, you will be able to fill out your questionnaire online. In prior censuses, you received a census form in the mail that needed to be filled out and mailed back to the Census Bureau, or a census taker knocked on your door.

For the 2020 Census, between March 12, 2020 and March 20, 2020, West Palm Beach households will receive a letter asking you to go online to complete the census questionnaire.

If you haven’t responded by April 1, you will receive a reminder postcard. If you still don’t respond, you will receive a reminder letter and a paper questionnaire. Use a pen with blue or black ink, or a #2 pencil to fill out the form. Mail it back in the postage-paid return envelope. If you have trouble with your form or answering a question, call the Census Bureau at 1-800-354-7271.

By April 20th, if you haven’t filled out your form, you will receive a third postcard reminder, followed up by an in-person census taker. 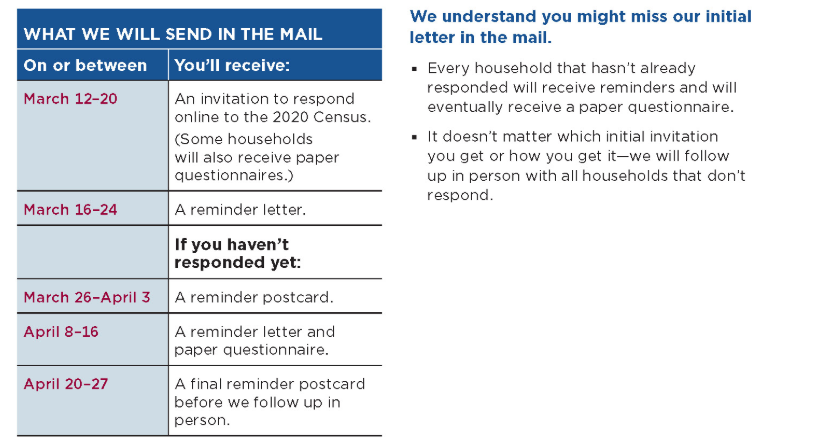 Being able to respond online will make the 2020 Census easy for most people. If you don’t have access to the internet at home, the City of West Palm Beach has computers at the library that can be used to fill out the 2020 Census online.

If for whatever reason you cannot fill out a form either online or on paper, please call (800) 354-7271. A census taker will fill out your form over the phone. Remember, for every person the census does not count in West Palm Beach, you could be losing out on thousands of dollars of services. View more information on responding to the 2020 Census.